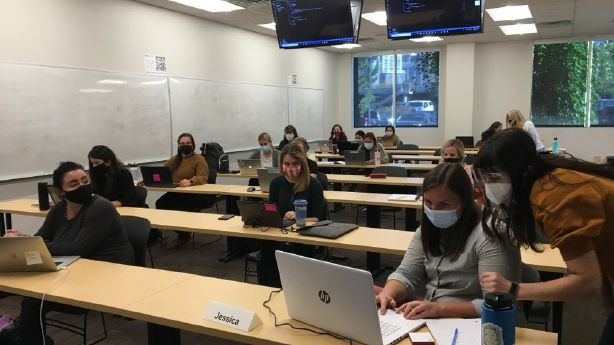 “We love having tech companies come to Utah, but oftentimes it’s very masculine and then you have less women in those roles,” Susan Madsen, founder and director of the Utah Women and Leadership Project, said recently at a Silicon Slopes Town Hall event.

While there is room to improve, Madsen noted she has seen an increased effort from businesses in recent years as the benefits of a diverse workforce become well known.

“The great thing is, I think there’s a lot of companies thinking about that now and trying to make those changes so that they can get the benefits the research (shows),” she said.

Recent social movements, like #MeToo and Black lives matter, have forced companies to reevaluate their own culture and make necessary changes to increase diversity, Madsen said.https://011f0f65b888d22646384a9bec94f00a.safeframe.googlesyndication.com/safeframe/1-0-37/html/container.htmlAdvertise with usReport ad

“They’re more interested, and I think they’re realizing this is not going away,” Madsen said. “That brings some energy, and we want to be helpful resources to businesses out there.”

Historically, the tech industry — including Silicon Valley and other main hubs in the U.S. — has employed mainly men, with women representing about 25% of employees in computing and math jobs across the country, according to a study by the National Center for Women and Information Technology.

In recent years, many companies and organizations have been dedicated to reaching gender parity, like RizeNext, a company aimed at creating a diverse workforce. As part of its effort, the company launched TECH-MOMS, a program that helps Utah mothers re-enter or break into the tech industry.

The program offers classes that train participants on coding, data science and other skills crucial to succeeding at a technology-based company.

It’s is aimed at helping women get jobs in the tech field and close the parity gap often seen in tech companies, which typically employ more men.

“It’s not just for the sake of having more women; the research is clear that when you have … more women on boards of directors, in top leadership teams, … there’s financial benefits,” Madsen said.

According to RizeNext, although more than 30% of Utah women hold a bachelor’s degree or higher, they only make up about 15% of the state’s tech workforce, compared to 22.5% nationally.

According to the most recent study by the Utah Women and Leadership Project in 2018, the percentage of Utah women holding management positions in business was at 32%, lower than the national average of 40.2%.

The percentage of Utah men in leadership positions was higher than the national average at 68%, compared to 59.8% nationally.

Studies have shown companies that have a more diverse workforce see more innovation, more creativity, can make better decisions, and are better at problem-solving, Madsen said.

“Tech is a universal language that will continue to permeate our everyday lives,” said Cameron Williams, director of diversity at the tech company. “If the tech industry doesn’t represent the world that uses it, it will never produce optimal outputs or the efficiency that we seek to achieve in our products and services.”

As one of the founders of the Parity Pledge, an organization that asks companies to commit to considering qualified women and people of color for every open position, Domo feels it’s important to remain intentional about diversity, Williams said.

“In order to avoid unconscious bias in all aspects of the funnel from product development to marketing of those products, diverse voices must be heard to ensure that all basis are covered,” Williams said. “Because human beings create and decide the logic of technology, its output must be scrutinized through a myriad of lenses.”