The status of women in Utah politics 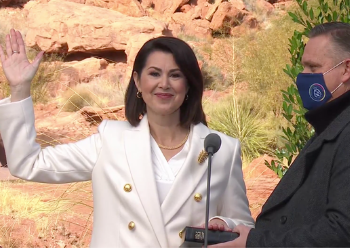 The status of women in Utah politics: A 2021 update – Dr. Susan Madsen and other researchers with the Utah Women and Leadership Project first reported on the status of women in Utah politics in 2014, updated that report in 2017 and just released their latest iteration. In a nutshell, Utah still has lots of room for improvement. Utah is one of only 11 states that has no women in their federal delegation. With the election of Deidre Henderson as Lt. Governor, we have one woman serving in statewide office and she is only the second woman to ever serve as Lt. Governor. Utah has never elected a woman to be governor, treasurer or auditor. One woman has been elected Attorney General – Jan Graham, a Democrat who served from 1993-2001. Nationwide, almost 31% of state legislators are women. In Utah, we come in 40th place, with 24% of our legislators being women – 5 in the Senate and 25 in the house. Of those, 16 are Democrats and 9 are Republican. Out of 22 leadership positions in the House and Senate (11 in each body), there is one Republican woman serving in the Senate and 7 Democratic women serving in both the House and Senate. One researcher noted in a related report from UWLP that “If women are to achieve parity in elective office, most of the gains will have to come from the GOP.”

On a county level, “73 county commissioners in Utah, 65 (89%) are men, and eight (11%) are women, who serve in the counties of Beaver, Davis, Duchesne, Grand, Iron, Millard, and Washington. Of the six county councils with a total of 40 seats, 32 (80%) council members are men, while 8 (20%) are women. 53.3% of the predominately full-time elected positions of clerk/auditor, treasurer, recorder, and assessor are held by women.”

Of the state’s 248 municipalities in the state, 43 have female mayors, and 9 of those represent cities with a population of 30,000 or more. In 2019, 29% of city or town council seats were held by women. There are 47 councils with no women and on the other end of the spectrum, Sandy has 86%.

The report concludes that “although there has been some progress in the last few years, we encourage Utah leaders and residents to do more to implement and support these efforts.”

What it’s really like – Rep. Candice Pierrucci, MPA, joined Dr.’s Madsen and Townsend to study how current and former female elected officials view their experiences in office and what advice they would share with other women thinking about running. The top three reasons women chose to run were number one, they were asked, number two, they wanted to make a difference and number three, they were dissatisfied with the status quo. The top four challenges they experienced were gender bias, being subject to public criticism, rumors and personal attacks, meeting the time commitment and facing the challenges associated with running. The study compiled the advice from participants into 10 “To Do” items and 10 “Not to do” items. To dos include: Be yourself, do your best and have no regrets, be prepared, remain professional and develop a tough skin. Not to dos include: Do not ask permission or be afraid to challenge “authority,” do not doubt your reason for serving or your ability to do so and do not apologize for your passion. The study quoted one respondent who said: “Being different doesn’t mean you don’t belong, it means your voice is needed more than ever.” “As Lt. Governor Kerry Healey of Massachusetts stated, “The mounting issues facing our country are complex. If we’re going to solve these problems, we can no longer afford to leave the talent of half of our nation out of the conversation.” As is shown by the lived experiences of the women in this study, more can be done to support women in their runs for elected office and in their service as elected community leaders at all levels of Utah government.”

Strategies women leaders can use – Dr. Madsen, writing in Forbes says that “women continue to experience barriers, challenges and prejudice that impact their paths and progress. And, in today’s Covid-19 environment, women have seen a greater decline in their work opportunities than men and an increase in unpaid care work, leading to what some are calling a ‘pink-collar recession.’”

She offers three strategies that women in government can use: Keep leaning in. Look for organizations that provide formal leadership development opportunities Seek out support networks. Dr. Madsen concludes that their research found “that women in government leadership roles showed ‘considerable resilience and persistence while navigating challenges and frustrations, particularly in the face of persistent gender bias.’”Why does it matter? This is why: